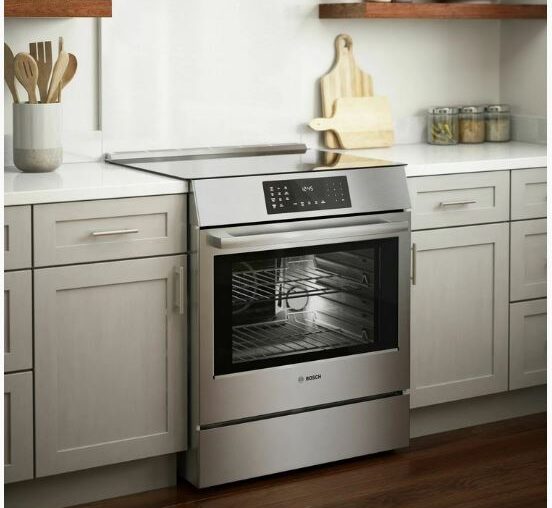 As the green building industry talks about decarbonizing the housing market, the concept of total home electrification is a common one. In fact, some local governmental bodies like Denver are moving towards that as a regulatory goal for new homes. The environmental rationale for total electrification is simple.  Electricity can be generated from sources that do not emit carbon dioxide. Conventional home fuels burned for heating, water heating, or cooking, cannot, and we have an imperative to reduce society’s carbon emissions as quickly as possible.  Yet there is one key sticking point for those dreaming of a new home, one that often hits very close to the heart.

I’m talking about the gas stove (including propane).

It was certainly a sticking point for me.  I was one of those people who needed a gas stove. I consider myself a good cook, and the gas stove had become an important part of that self-image. Good cooks used gas. Bad cooks used electric. The still-electric alternative often proposed by green building experts, induction, was just a dressed-up version of electric. The best of the bad, but still bad.

Fast forward to my current home that I bought last year. In a tough housing market, compromises were made, and I ended up with a home with no gas hook up. In fact, gas was not available at all in the entire neighborhood.

Alas, I was doomed to electricity as an energy source. I was distraught. But, I made lemonade out of lemons, and I purchased an induction stove. I bought a Bosch Benchmark Induction Stove.

And you know what? I am glad that I did.  It turns out I vastly prefer it to gas. I get the same precision of gas with some added benefits, including energy efficiency, a lower carbon footprint, and significantly better indoor air quality. I have read some reports which state that induction can be up to 90% efficient at delivering heating energy to the food, while gas stoves hover in the 40-55% range.  I have joined several professional chefs and experts in our preference for induction over gas.

These are the things that I have found, through my personal experience, that induction does as well or better than gas:

These are the things that I have learned to live with:

And now that I have overcome the emotional hurdle of using induction over gas, I have realized that gas is an inferior choice for several important reasons.

First is safety. This can be a huge issue that I learned firsthand in my last home. Malfunctioning gas stoves can be very dangerous. I was making something in the oven and my CO alarm went off. I thought this was strange, since I could see the burner flames in the oven.   But I sheepishly called my fire department out of an extreme abundance of caution. Fast forward 10 minutes later, and the fire department was urgently pushing me and my pets out of the home. While the oven was working, it was malfunctioning, and producing dangerous levels of carbon monoxide: the odorless, colorless gas that is often dubbed the “silent killer”.

Every year more than 400 Americans die from carbon monoxide poisoning, which can be produced without warning when a combustion appliance malfunctions.  If I hadn’t had a CO alarm, or hadn’t taken it seriously when it went off, I could have been a statistic.  (Which underlines the very strong emotional attachment I had to gas stoves since I still wanted another one in my current home, even after that scary experience.)

Second are the environmental and health issues caused by gas stoves.  Even properly functioning natural gas and propane stoves release formaldehyde, nitrogen dioxide , and other harmful pollutants into the air. These pollutants can reach unhealthy levels inside your home even with an exhaust fan.  There is a growing body of research on the harmful health effects of gas stoves, and the bad news on this front keeps mounting.

A 2020 Rocky Mountain Institute report reveals that homes with gas stoves contain approximately 50-400 percent higher concentrations of nitrogen dioxide than homes with electric stoves. This level of indoor air pollution results in levels of indoor pollution that would be illegal outside.

And kids can be especially prone to ill effects. Multiple studies have found that gas stoves have been linked to increased risk of asthma in kids. In a recent Slate article, they state that “A 2013 meta-analysis of 41 studies found that children living in homes with gas stoves had a 42 percent higher risk of experiencing asthma symptoms, and, over their lifetime, a 24 percent increase in the risk of being diagnosed with asthma.”

So, while I was a reluctant converter to induction stoves, I now find that it was one of the smartest choices I could have made. From a cooking standpoint, I get everything I want from a gas stove—plus some—while I have created a much healthier and safer environment for my family and me.