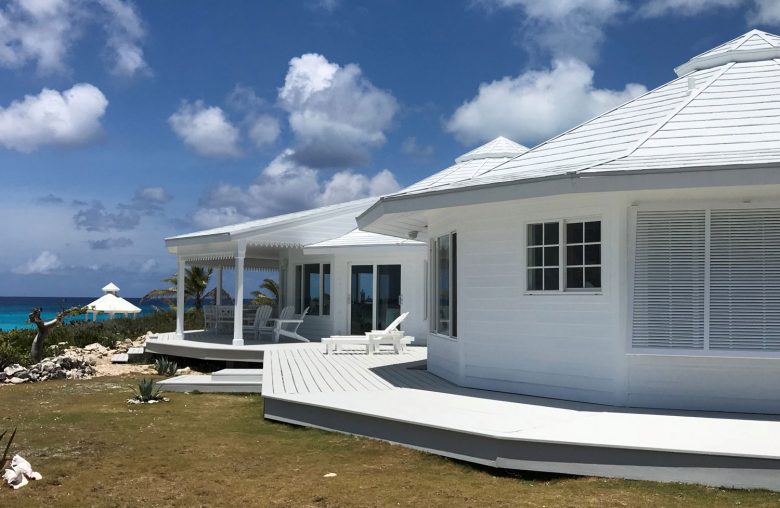 Some of our customer stories transport us to exotic destinations, demonstrate the extraordinary turns that home building can take and once again illustrate how Deltec homes play key roles in people’s most adventurous life objectives. In this feature we’re sharing the story of a couple living their dream on a small Bahamian out island in their Deltec home(s).

Since their early twenties, Jemma and Penn (not real names for privacy) dreamed of owning a beach house on a remote out island of the Bahamas, a small secluded slice of paradise that they had visited numerous times. In 2014, they put their dream into motion and purchased a 700 square foot round house sitting on the rocks in the most scenic cove. 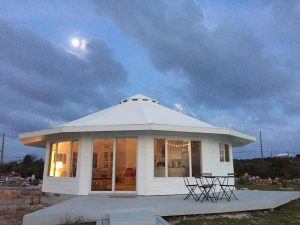 “We actually fell in love with the lot and the unique spot it provided,” said Jemma. “We did not pay much attention to the fact that it was a Deltec home and could withstand high winds—obviously well suited for the natural threat of hurricanes in this region.” Since it was an older Deltec, they refreshed its interior and moved in.

Soon after they moved in, the home was put to the test…

On October 1, 2015 hurricane Joaquin, a cataclysmic and deadly storm, directly hit the island, packing winds just shy of a Category 5 hurricane. The island was devastated and many houses were destroyed due to wind and storm surge. When Jemma arrived one week after the storm, she was mentally prepared to have lost their new nest, but was shocked at what she found.

“Many of the old, unprotected non-impact windows had exploded and been ejected up to 30 feet outwards, sheetrock in the ceiling had plummeted to the floor and the majority of the furniture could not be salvaged due to salt water blown in with the strong winds. The house structure, however, was completely intact,” she said.

They immediately hired a local contractor to restore the home and before they knew it, the dream of owning a Bahamian beach house was back on track. When asked about their first hurricane experience, Jemma offered this advice:

“If you want to enjoy a house in the Bahamas with peace of mind, you have to build beyond code to the absolute strongest specifications – take no chances. It was all about the superlatives: finding the perfect combination between maximum beauty and maximum strength.” 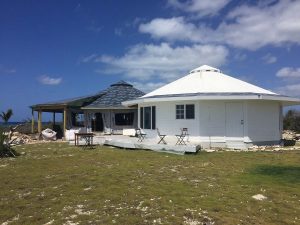 Jemma and Penn had always planned to extend the living space for family and friends to visit. They explored many avenues but due to the complexity of adding to an existing house, wanting to build as strong as possible and ensuring that the house allowed for the best possible views, they kept coming back to Deltec Homes. In 2016, they took what felt like the most natural, safest and suitable step: signed on with Deltec for a 144 square foot connector, a 1500 model from the 360° Collection and a 560 square foot detached garage.

The couple hired Terry Zierke, a Florida-based field consultant with enormous experience in assembling Deltec homes, to join the crew. Once the foundation was done and the materials arrived on the island, Terry and the crew began construction.

Making it their own

One of the best features of this house is its location. 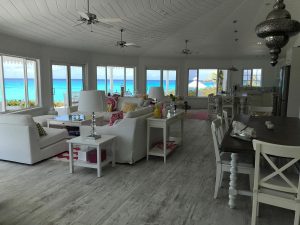 “It’s all about the view,” Penn says. “It sits on the coastline, 26 feet above sea level, overlooking the most beautiful bay”. The windows and the round shape allow for a 240-degree view. “The effect is astounding,” he continues. “It feels like being in an aquarium overlooking the ocean, sometimes literally: local dolphin pods inhabit the island since hurricane Joaquin and come swimming by on a regular basis since. Seen from far the house stands low and wide and blends perfectly into the natural environment.”

During the project Jemma, due to her passion for architectural design, did an enormous amount of research when it came to exterior and interior design of the beach house. She wanted it to be a combination of select Bahamian architecture on the exterior and Indian and Moroccan on the interior. Some of the items that helped achieve her vision:

The home was completed by local general contractors, Charlie and Sophia Miller, in March 2018. 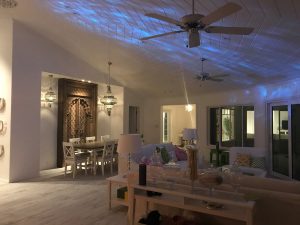 “This was one of the most interesting and eye-opening projects I have had the chance to manage. In all my life I have never seen as much hardware, targeted at bolting and fastening the trusses and side panels down into the ground, as what was sent by Deltec. Not only is this house a real beauty in its lines, in the view it provides and its architectural details but it’s actually a bunker and I feel that the house will be able to withstand storms with minimum damages,” said Charlie.

Jemma and Penn named their new home White Nights Two. Jemma explains, “White Nights One is our main house in Europe and although the houses are very different their two commonalities are their calming white interior and their ability to blend with the outside environment that we so value”.

Jemma told us that with this home, she thinks of a quote by Swedish poet Axel Munthe: “My home shall be open for the sun and the wind and the voices of the sea – like a Greek temple – and light, light, light everywhere!”

“That is an understatement for White Nights Two!” She said. 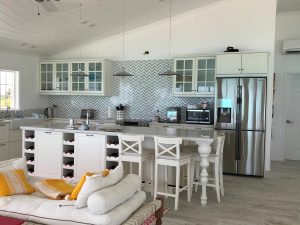 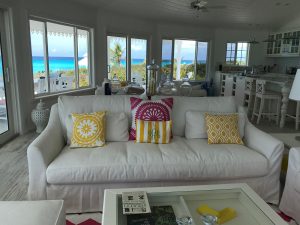 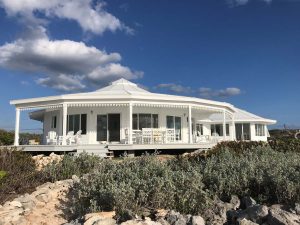 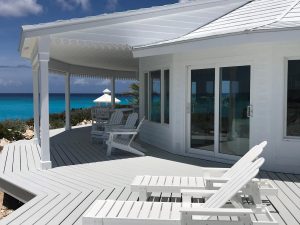 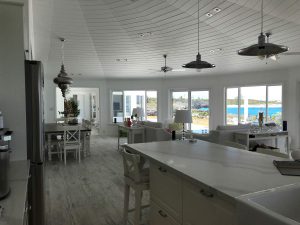 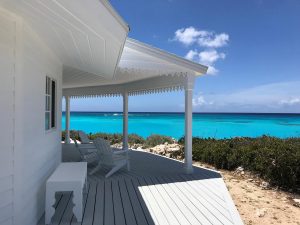