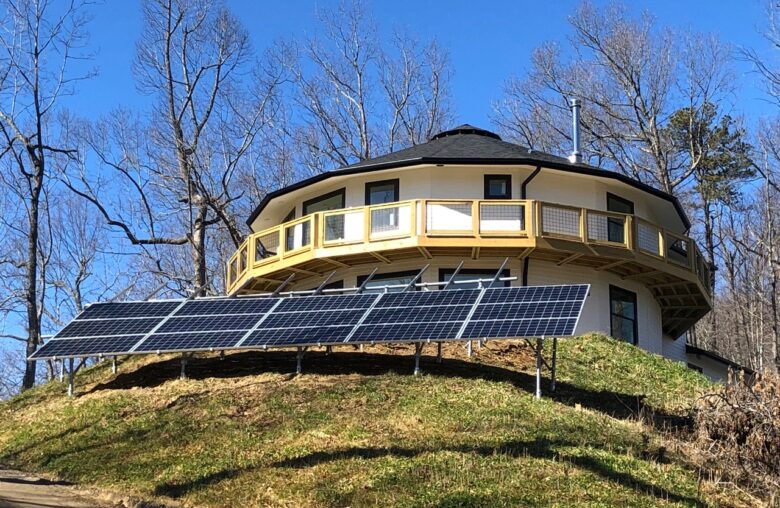 One of the biggest benefits of a Deltec Home is that it can be designed to fit your personal tastes and styles, together with your sustainable building goals. Our systematic approach and customization options provide the opportunity to build a home that is truly yours.

In a recent blog, we detailed two high performance Ridgeline models from our Renew Collection.  But for those customers who love the awesome views, delightful uniqueness and high customization of our signature round homes, our 360° Collection has always been a highly sustainable option.  Read below for two examples of recently finished 360° Collection projects with interesting technical features.

Up on the Mountain

Tyler and Chelsea moved to Western North Carolina from California. Building on a secluded piece of land atop a mountain, where sounds of the idyllic valley below can be heard wafting up the ridge each morning, sustainability was hugely important to their goals. They wanted a home and office with a low embodied carbon, and low enough energy consumption to be able to go totally off-grid. Our track record of building high performance homes, and our values as a B Corp, drew them to Deltec. The power of our 360° Collection to capture a view like no other put them in a round home.

Their design used a 2-story 1200 square foot round model on a slab foundation, plus a 2-story wing for stairs, and a single-story wing for an attached garage. As part of a strategy for superior insulation levels in our mixed-humid climate, they chose our “Deltec Energy Wall,” an upgraded perimeter wall option. This open-stud wall system, assembled in our factory, uses 2×6 stud framing (compared to the industry standard in North Carolina, which is still just 2×4) for greater strength and thicker cavity insulation values. It adds to that an exterior layer of continuous foam insulation, a useful strategy for wrapping the entire house in an extra blanket of insulation and reducing what energy nerds call “thermal bridging”: that is, the tendency for heat to escape more quickly through areas of lower insulation value (such as the wood studs). The structural headers of the Deltec Energy Wall are insulated in our factory with recycled scrap foam material, and our craftsmen apply a gasket at the perimeter of the plywood sheathing to seal it to the wall, increasing the home’s total air-tightness. The home captures views using windows from Marvin Essential collection, also installed in our factory.

Energy systems were a critical aspect of their design process, since running power to this remote site proved to be a challenge. Rather than be daunted, this challenge spurred Tyler to accelerate his eventual plan for the site, which was to install a solar electric array, battery energy storage, and a backup wood stove and propane generator, all to allow him to take his home off-grid if he wanted. Yet he also wanted to limit propane use and take advantage of the variety of very high efficiency all-electric appliances that are common in this region for high performance heating and cooling, such as two ducted mini split heat pumps, a heat pump water heater, and an induction range. He also needed to provide power for his Tesla electric vehicle charger.

People often associated “mini splits” with the iconic, ductless “white box on the wall” that blows heated or cooled air directly into the room, eliminating air ductwork. And indeed, removing or reducing the amount of ductwork in a home can make a difference for heating and cooling energy costs, as ducts tend to leak some amount of air away, and constrictions in the duct runs can force the need for larger blower fans and greater capacity equipment than what might otherwise be needed. But mini splits have a couple of other distinct technological advantages over the “conventional” ducted heat pumps that commonly provide heating and cooling to homes in the southeastern US, advantages that make them highly relevant to low energy homes.

One such advantage is an improved refrigerant technology that allows some models to deliver warm air even when outside temperatures are very cold without relying on a backup source of heat, a critical function in this mountainous climate zone that does still see cold weather extremes. The other advantage is an ability to vary the heating or cooling output based on conditions. This is rather like the advantage a car with a CVT transmission might have over a (hypothetical) single speed car: the system has nearly infinite”gears” available to it and can constantly choose the correct “gear” to run in to deliver the most comfort at the lowest energy use. This is an important feature of an electric heating system in a home with an off-grid solar array, as historically, even highly efficient electric heat from heat pumps still draw a lot of electricity at once, and can drain solar batteries very quickly. By contrast, the use of multi-stage or infinite stage heating systems like mini splits can allow the lowest possible electrical draw for the given weather conditions. While a sizeable battery bank is still required, it becomes more feasible to provide some heating energy from these highly efficient electric heat pumps, with a wood stove as an ultimate backup.

Meanwhile, the indoor components of mini splits actually come in a variety of “flavors,” from the iconic wall mounted unit, to floor mounted units, to ceiling cassettes, and…yes, even ducted air handlers. The latter offers the ability to serve multiple smaller rooms with one air (still small) handler, reducing system costs (vs putting one white box on the wall in every single room), while still delivering the low temperature and variable speed advantages that mini splits offer. Based on the size and lay out of the rooms in Tyler and Chelsea’s plan, one ducted mini split per level made the most sense.

I mentioned in my previous blog about the benefits of heat pump water heaters for all-electric homes, but they can be challenging to locate in some floorplans in a place where they get enough airflow to operate, and where their noise and cold air doesn’t bother the homeowner. In Tyler and Chelsea’s case, the mechanical room, while tucked under the stairs, was still a bit smaller than recommended for a heat pump water heater, so we attached air ducts for it to pull in it’s warm air and dump it’s cold air to outside. Although this reduces the efficiency somewhat, it’s still much better than a standard electric resistance water heater, so it was a worthwhile tradeoff to stay all-electric.

Since they were building here in our home region, they used our in-house builder, Deltec Building Company, to act as general contractor for the project. The home is Energy Star Certified, receiving a final HERS score of -17. It uses a 10KW solar array with 5 KiloValt HAB Batteries and a 13KW Generac backup generator. The off grid solar array and equipment was designed and installed by local solar contractor, SolFarm.

Deep in the Snow

Shan was an acoustical engineer with a background as a hobby conservationist. He and his wife Linda were also looking for an energy efficient home that could capture some unique views on their property in southern Alaska.

Alaska can be a very challenging place to build. Building materials can be expensive and time consuming to get to the jobsite, as they often have to be shipped in by boat. The buildable time frame is short. The amount of available sunny hours to feed a solar electric system, if that happens to be your goal (as it was for these clients) are not generous, and the temperature extremes are harsh. Energy rates are also nearly double what they are in much of the continental US, so every measure to build a more efficient home is even more valuable.

To meet the design challenges of the harsh local climate, Shan and Linda chose our upgraded “Double Stud Wall” option with their floor plan, which used a 900 square foot base round model with two wings. Our Double Stud Wall option uses two layers of 2×4 studs, in order to create a nearly 10″ thick wall to pack full of insulation. To take full advantage of this highly insulative wall, highly insulative windows should be used as well, which meant upgrading from the more common double-pane windows to higher performing triple-pane windows on the north, east, and west sides of this home. Thick insulation values in the roof, and a conditioned crawlspace built with insulated concrete forms, cap off the super insulation strategy for this cold climate.

Like Tyler and Chelsea, Shan and Linda were interested in having an on-site solar array with battery storage, in their case to provide backup power in situations where winter storms cut off the grid. And they also wanted to limit their system’s reliance on propane or other fossil fuels when doing so. Due to the cold climate and limited sun, the energy-using systems in the home had to be chosen very carefully indeed.

First, the heating demand needed to be reduced as much as possible. In addition to the super insulation strategy described above, air-tight construction was extremely important. In addition, the lay out of the home used passive solar design strategies to harvest and hold on to the sun’s heat, by minimizing window glass areas on the north, west, and east, but increasing it on the south, where the sun (when available) would shine in throughout the day. A special low-e coating on these south facing windows designed to let in as much of this heat as possible, combined with a dark, dense tile floor in the sun space to absorb the heat, makes the most of this available warmth, storing it in the building materials, making the interior temperatures more stable. Of course, a mechanical heating system is still needed, and surprisingly, an electric mini split heat pump still made sense, even in this cold climate, paired with a backup wood stove, and backup electric baseboard heat. Their heating system design used a combination of a ducted mini split for the back half of the plan, a ductless mini split for the living area, and a ductless for the main bedroom suite. And since water heating is the next biggest energy expenditure in a home after heating, the nearly unsurpassed efficiency of a heat pump water heater was still the winner, this time located inside their conditioned crawlspace.

The home was tested for compliance with Alaska’s Building Energy Efficiency Standard (BEES) system, received 6 stars, and a final blower door test of 1.19ACH50. After a winter of living in the home, the homeowner estimates that they consume around 4000 kilowatt hours a year, and generate around 7000 with their 7.6KW solar array (the difference is stored in the backup batteries).