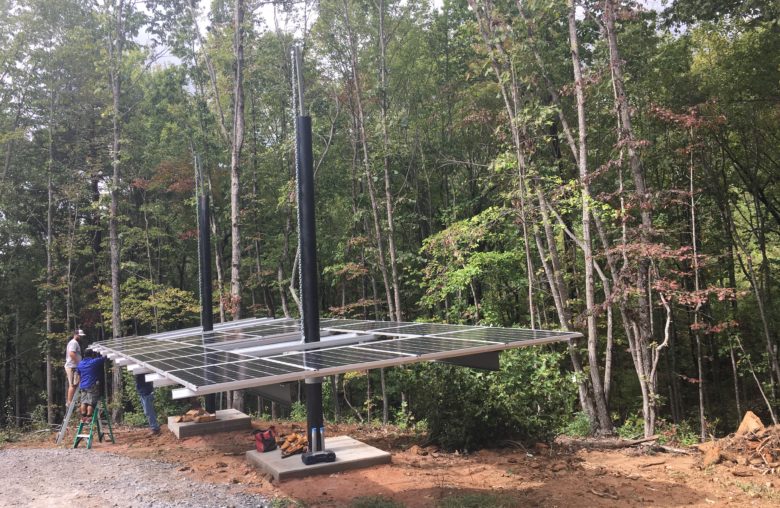 To me, off-grid homes have always been about a certain kind of longing. A longing to live a life that is simpler, more self-sufficient and more rewarding.  A longing for a better way, one that respects our connection to the natural world and treads more likely on it. One that gives us a chance, by the way in which we live, to experience it more deeply.

There are fewer prides more fulfilling than having conceived of, designed, and built something with our own hard work—this is what drives many people to imagine and ultimately build their dream home.  And fewer balms to sooth our anxiety greater than that of wresting control of the systems in our lives.  Including energy systems, water systems, and food systems that sustain us in our homes every day, which is at the heart of what off-grid living is about.

If you find yourself thinking more wistfully about off-grid living during these trying times of isolation, you aren’t alone. And you’re doing so at a uniquely exciting time. Residential solar energy, the most common form of energy used to provide independent electricity that allows one to disconnect from the electric grid, is more widespread, more popular, and more financially accessible than ever before.  Meanwhile batteries, the key technology in making-off-grid work, are also undergoing significant changes, at long last.  At the same time, home energy management systems, and grid energy control systems more broadly, are also expanding.

These developments offer exciting new ways for us to live in homes that are more sustainable and resilient than ever before.

How Off-Grid Used to Work 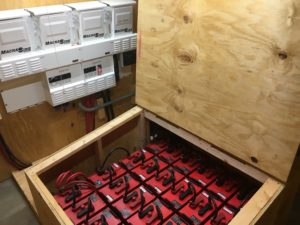 Multiple boxes of lead-acid batteries, like this one, are needed to provide enough energy storage capacity for a typical off-grid home’s needs.

When it comes to living in a home off-grid while still maintaining modern comforts, like electric lighting and access to the internet, the technologies, techniques, and the how-to engineering guides have been around since the 1970s. (If you’d like some book recommendations, my personal favorite is More Other Homes and Garbage, first printed in 1975.)  If you’ve ever met some of these early adopters—and living here in the beautiful and remote mountains of North Carolina, I certainly have—you’ll quickly find a personality that delights in tinkering, exploration, and learning many interesting things the hard way. I’ve toured a number of their homes, and I’ve worked with a number of Deltec homeowners over the years who have designed and built off-grid homes.  While there are some minor variations, the basic template for an off-grid home has remained relatively unchanged since the 1970s:

Clearly, this kind of setup has it’s pros and cons.

The most obvious pros are resilience, independence, and control. Power outages caused by storms or grid issues become concerns of the past—although, they are replaced by new concerns about system maintenance and power budgeting.  While electric bills are clearly moot as well, it’s important to realize that utility bills as a whole will not be, since your backup fossil fuels must still be paid for, and will in fact account for a larger percentage of your home’s total energy use than they might in gird-connected home.

From an environmental sustainability standpoint, conventional grid electricity production is a dirty affair, spewing tons of carbon dioxide and harmful air pollutants into the atmosphere each day. A total dependence on home solar power removes us from that distasteful system—although, once again, off grid living does not remove dependence on fossil fuels.  They are still extracted from the ground at great environmental cost and create air pollution when burned.  This begs the question, is an off-grid home really more environmentally friendly than a grid-connected home?  I would argue, not necessarily.

Another con is that this lifestyle is usually only available to the well-off. The electricity generation and battery storage technology are expensive up-front components that are essential to the whole operation, and financing for these types of systems is tricky. Banks are still not generally willing to finance new construction loans for off-grid projects.

If burning wood for heat doesn’t sound like the home of the future to you, you might be thinking, ‘surely technologies have changed since the 1970s?’ And indeed, they have, but until recently they have generally changed in ways that have had mixed results for the practicality off-grid living.

On the positive side:

But, on the more mixed side:

However, the growth of EVs has done something else that powerful for the future of home solar, and of distributed solar in all its forms (grid-tied, utility scale, etc) more generally. At long last, developments in this industry in particular have helped to reinvent the most limiting, most expensive, most temperamental and maintenance intensive part of off-grid living.

Lead-acid batteries were once the king of the off-grid market. These batteries weren’t that different from the 12 or 24 power cells you find in your car. They had a maximum life of about 10 years, and that was only if you were careful never to drain them very deeply.  They were heavy, and toxic, and the cheaper versions required daily watering.

Increasingly, however, home batteries systems are starting to look more and more like electric car batteries, as some of the same advancements that have allowed EVs to take-off have benefited the way home energy storage in batteries could work as well.   It’s no coincidence that many of the major electric car manufacturers—Telsa’s PowerWall being the most famous example—have entered the home energy storage market with products that are really just variations on their EV battery design.

These batteries have a different chemistry that off-grid batteries of the past: they might be cobalt-magnesium, iron phosphate, or lithium ion. (The environmental sustainability of these materials and their supply chains is worthy of discussion, but that’s another post.) They are more compact: instead of requiring a dedicated battery closet, you might be able to fit what you need in an open slot on your garage wall.  They can be cycled much more rapidly without taking dramatic hits to their lifespans.  They can operate in a wider range of temperature conditions.

I should caution that they are not less expensive than the lead-acid batteries of old, yet. In fact, they carry a slight price premium. But when paired with increasingly sophisticated home energy management controls, they bring enormous potential to allow homeowners and even entire communities to take greater control of their  energy use and production.

Instead, people are putting these batteries into their homes, but staying connected to the grid. It is in this kind of grid-hybrid system that a brighter future for home energy use overall may be coming. One that increases renewable energy deployment everywhere, reduces climate change, and gives the homeowner more control, without having to skip out on modern conveniences like AC.

Grid-hybrid systems give the homeowner the very best of both worlds. In a typical grid-tied solar system, without batteries, homeowners enter into purchasing agreements with the power company to buy and sell energy.  Typically this means they sell excess energy during the day, but purchase energy from the grid at night when there’s no sun. With a home battery system, rather than selling that excess energy back to the grid, often at declining rates, you can store it on site to use later, further reducing your power bill. Yet you can still have access to a backup source of energy if the grid does go down—something that, for safety reasons, a typical grid-tied solar array doesn’t allow you to do.  But, having the grid as the ultimate backup helps even out the intermittent nature of solar energy, reducing the size of the solar array that you’ll need and enabling you to use those highly efficient all-electric heating, water heating, and cooking technologies that wouldn’t be economically feasible in a regular off-grid situation. Meanwhile, smart home energy monitors helps you optimize and lower your overall energy use to begin with.

The benefits go deeper still.  Customers can use their home energy monitors to choose when to use grid energy and when to use their own energy, timing it to make the most of their solar when they have it.  For those customers who live in areas where they are charged different rates for energy depending on the time of day that they use it (a trend among power companies that is likely to become more and more common), they can pull grid energy only at the most economic time to do so.

This kind of energy use management helps the community just as much as it helps the individual, because evening out when people’s homes call for electricity helps to solve one of the biggest problems in utility management right now: the mismatch between the highest and lowest levels of energy demand.  This matters to you even if you don’t think you’d care about the utility’s problems, because it avoids the common practice of firing up especially dirty “peaker” power plants that utilities often have to call upon when energy demand suddenly spikes, such as in the evening when everyone comes home and turns on their TVs, or late at night on an especially cold winter. Avoiding extra peak generation directly reduces air pollution.  Evening out electric demand can also reduce issues with rolling brownouts in areas that might be prone to them.

But the community resiliency benefits of pairing distributed solar generation and battery storage with smart home energy management could go further still.  What if entire communities, equipped with community solar arrays and dispersed home battery storage, could store or export energy throughout the community as it was needed?  These communities would retain local self-sufficiency in the events of power outages, but would share the electrical load in normal times. Though regulations would need to change and technology would need to improve, such “grid-interactive connected buildings” are a research priority of the US DOE.

Grid interconnection, rather than isolation, also lets communities distribute their energy more evenly in all kinds of creative ways.  In a previous post I linked to a demonstration community where the local utility is storing some of their excess energy generation during the day in people’s heat pump water heaters. In the future, homes could even switch energy produced by their grid-tied solar arrays around, between their home, their electric vehicle, and the community grid, at will, depending on where the energy use need lies.  With “Vehicle to Home” technology allowing EV batteries to connect to home energy systems already available in some countries, charged EVs could even be deployed to bring an extra boost of power to places that need it.

These ideas might run counter to that ethic of independence that drives a desire for off-grid living, I get it. But the thing is, even retreating to live off of the grid doesn’t remove us from our position, as members of our larger community.  Our decisions still affect the way things go for others—that’s the interdependent, interconnected nature of our world.  Like it nor, there are so many ways in which we are all in this together.  I have to wonder: should we be seeing the home energy of the future as an individual good to be hoarded, or should it become, instead, a community resource to be shared, to the betterment of us all?